The best sex swing in our opinion is the Fetish Fantasy Series 360 Degree Spinning Sex Swing. You get the full benefit of being able to rotate 360 degrees. And a well built, long lasting product. However, if you don't have the space for a fully suspended swing then you'll need to get a door swing.

No dungeon is complete without a sex swing as the centerpiece.

Heck, you don’t even need a full dungeon.

A spare room will do!

Keep that door locked and make it your special place.

If you are trying to decide which one to buy… we’ve got you. Especially if this is your first time checking them out.

They are a big investment. So it’s important you understand the facts. 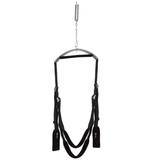 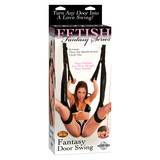 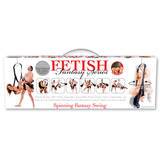 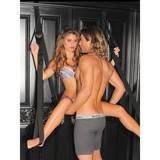 Why Use A Sex Swing?

“Does it really make sex THAT much better?”

Your basically having sex with 0 gravity (since you or your partner are suspended). Meaning you can put yourself in positions and STAY there. You can control their body, placement and weight. As things unfold in the bedroom.

You can work the best spots until the pleasure is coursing through your entire body.

If you struggle with holding certain positions for long periods of time, then swings will help you.

You don’t have to stay in awkward positions to feel good.  All those hard, difficult to reach positions become quite easy to maintain.

Think about giving or receiving in the doggy style position. Where you can move as high or low as you want! It adds a completely different dimension to things.

There are loads of positions to try. You can either have one person in the swing or both (just make sure you get a swing that can support both of you).

How To Use A Sex Swing

You've got a seat, wrist straps, and leg straps.

The next bit is self explanatory… you're going to put your arms in the wrist straps and your legs in the leg straps.

But you don't have to just sit down in the swing. You can lie on your back or stomach too.

Have fun with it in a safe space. This is your chance to let your imagination run wild.

One partner should lay on their back in the swing. Find a comfortable spot and close their eyes. Feel the weightlessness. Then the other partner can get on their knees and slowly start giving oral. Experiment with pulling away. Stopping and starting. Hint: if you’re experienced with sex swings this is a great warm up.

What To Consider When Choosing A Sex Swing

Here's what you should consider before you purchase a sex swing...

If you only have space in a common area of your house (e.g. the living room), then you’ll need to dismantle your swing anytime you have a visitor.

I mean, unless they’re super cool!

So... you're going to be taking it down and putting it back up a lot. Therefore, you’ll want to pick one that is easy to set up, put away, and store somewhere.

Most sex swings are actually built with this in mind. So you can get steamy when the mood strikes.

Although some might be a little hard to store. Pay attention to this.

Do You Want 360-Degree Spinning?

It’s far easier to ajust your partner’s angles if your sex swing can spin 360 degrees.

Ignore this point if you don't want to explore crazy angles.

In our opinion it's definitely nice to have more freedom of movement. Especially as you start to experiment more! Which will inevitably happen the more you use it.

Suspended Or Against A Door?

Sex Swings can hang from the ceiling or a door.

The drawback of placing your swing against a door is it restricts the freedom of movement.

Because the swing is against a door, you can’t spin it around the full 360 degrees.

A suspended swing can go all the way round.

If you’re only interested in exploring simple angles then placing it against a door will be enough for you.

Otherwise...you’ll need to pick one that hangs from the ceiling.

Are Two (Or More) People Going To Sit On It At Once?

Your sex swing needs to be able to support enough weight.

Multiple people can sit in them.

I love to cuddle in the swing. Or just hang out in it and spoon after a heavy dom session. It’s much nicer than laying on the bed.

Now… I haven’t weighed myself in months. But if you really need to know if it can support your collective weight then you’ll need to jump on a scale. And get your partner to do the same. Easier said than done.

Then all you need to do is compare your total weight to how much the swing can support. You can find that information in the product description.

OK, now onto the actual reviews...

A great sex swing has the following:

You know which ones are most important to you.

So keep those in mind while reading....

First up, the Bondage Boutique Deluxe Fetish Sex Swing is a pretty solid buy. It's well-made, with comfortable leg straps.

Unfortunately, there aren't arm straps so you'll have to hold onto the top part of the swing.

If you like experiencing the complete loss of control then this is a problem. So pick a different one.

This swing is also pretty sturdy. While it can only support 300 pounds, it's still a high-quality product.

Setup was pretty easy meaning you can spend less time fiddling and more time having fun. The only thing I'd have to complain about is the lack of a headrest too.

The standout benefit of this swing is the build quality. Feels like it’ll last a long time.

Fetish Fantasy's Door Swing is a pretty good sex swing if you're looking for a bit of an intro.

It's on the less expensive side, easy to set up, and pretty comfortable.

Like some other high quality swings, it's made with nylon to add some extra padding.

This swing just hooks over the door so it doesn't take long to put it up and take it down.

But since it’s a door swing you won’t have the same freedom of movement as a ceiling one.

The wrist straps are a little loose, making it a bit easy for your hands to slip out. This can get a little frustrating, but you can get used to it after a while. If you think that's something that would really bother you, check out a different swing. But if not, you're definitely going to have a lot of fun.

Here's one of the higher-quality sex swings on the list.

This swing spins the whole 360 degrees which is pretty great for getting different angles and positions.

The straps are padded which adds a bit of extra comfort which is always nice. I found the set up to be pretty easy.

I personally prefer these suspended sex swings over the door jam ones. I just really like the freedom of movement even if the hanging ones don't always spin around. In my opinion, the ability to really swing around is something you DO need. If you want to fully test the limits of what a swing can do.

This swing, in particular, does take up a bit of space. It won’t work in a smaller room. I would avoid getting this if you don’t have a dedicated space for it.

Okay, quick, nit-picky thing: I don't really like the box. I think it just looks really amateur. The lighting's kinda weird, and both the woman and man look so really disinterested. But pettiness aside, I think this is a pretty great door jam sex swing.

It's easy to set up like the other door sex swing and it's easy to have a lot of fun.

But it’s easy to get back pain when you get rough. Because you’ll be banging against the door a lot! Sounds silly… but if you like it rough you won’t want to get this one.

I didn't really like the material used for this swing. It's a bit rougher compared to other swings on this list. That probably has to do with the lower price.

Nevertheless, despite these problems, I think it’s a better door sex swing than the other on the list.

Why? Because the wrist straps are a lot better. That makes all the difference.

The best sex swing out of the bunch would have to be the Fetish Fantasy Series 360 Degree Spinning Sex Swing.

This particular swing is great in terms of comfort and ease of use.

It may require a bit of extra storage. But it’s totally worth it.

I look forward to unpacking it when I get home. I don’t tell my partner. So he gets a nice surprise when he gets home. He walks in and knows it's going to be “one of those nights”.

The straps are super comfortable and allow for extended play with your partner. I don’t like anything ruining my play. I’m sure you don’t either.

If you don't really want to get a suspended swing, I have to recommend the Sportsheets Sex Swing Door Jam Kit. Because it doesn’t have problems with wrist straps like the Fetish Fantasy Door Swing. Even though the material is a bit rough. It's quick to setup so you can start bonding faster.