The Hitachi Magic Wand is one of the best value, high quality toys compared to other sex toys of its caliber. You can use it by yourself or with your partner and it can seriously enhance your pleasure by a factor of ten.

But before we get to the real nuts and bolts and review the Hitachi Magic Wand, first a little history of this retro, super iconic sex toy.

And like me, you’re probably as surprised that sex toys were being commercially produced  back then, but I suppose the women’s lib movement had something to do with allowing women to get off just as much as the men. (Don’t quote me on that though)

Unfortunately, America in the late 60’s and 70’s was still pretty sex negative, at least where women were concerned. The internet didn’t exist yet, so women couldn’t order sex toys online and have them shipped discreetly to their homes.

They had to pretend they were being good wives, or whatever, and having a sex drive was not something a good wife had.

The irony is, it gives a mean massage too (we’ll talk about that later).

So the branding wasn’t lying— not technically.

But does it still hold up now?

To give you a quick numerical rating, I’d have to say it deserves a 4/5.

But what exactly do I like about this baby? Why, I’m glad you asked.

1. It’s iconic design - Yeah, yeah, this isn’t a functional thing, but really, how could I not talk about the design? It’s got a retro feel, yet it doesn’t feel dated.

1. There are a lot of knock offs - I know this isn’t necessarily the company’s fault, but even when you search for the Hitachi Magic Wand directly, they only come up in ads. The rest of the results on the first page are not originals which can get really confusing.

2. There’s only two speeds - Granted, two speeds is really all you need with this wonderful toy, but this toy is pretty expensive. I had expected to see more speed settings especially with other toys boasting a whole gearbox of speeds.

Whoever tries to tell you bigger isn’t always better is lying. The head on this toy is great! It really helps you massage your whole clit which is super helpful. Remember when I told you how long it took me to come? That was because of this big, beautiful head. Trust me. You’re gonna love it.

If you couldn’t already tell from the name, this particular sex toy was designed in Japan. It has a distinct design that you’re sure to recognize (why do you think there are so many copycats trying to hijack Hitachi’s style?).

This little toy is designed to provide maximum pleasure, but it doesn’t scream sex toy. (Remember, it was supposed to look like a massager.)

So maybe you could still trick a couple people into thinking you just need to work out some knots in your back.

So, above I’ve already thrown out some pros and cons and the features of this toy, but I’m sure you want an actual review of it. Who I think it’s for, that kinda stuff. So here ya go:

And really, there’s something great about getting yourself a higher quality sex toy than the usual stuff you find on Amazon (not that there’s anything wrong with Amazon sex toys).

So if you’re just beginning to think about getting into using sex toys, but you don’t want to spend a lot of money, this is a great toy for you.It’s also just an all around good option. You can use it by yourself or with your partner. Either way it can enhance your pleasure by a factor of ten.

I’m serious. At least use it with your partner if they don’t get insecure about a piece of plastic getting you off. You’d be surprised how many people feel threatened when you feel good, but I’m hoping all of you have supportive partners when I recommend this toy to you.

It’s really a great piece of classic technology everyone should own. It’s unique design allows for a type of pleasure I haven’t felt before.

How Does The Hitachi Magic Wand Compare Your Other Sex Toys? 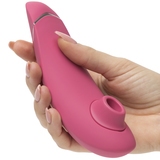 I know! I know! The name’s awful! But it’s probably one of the most well known and well regarded sex toys of its type.

The Womanizer Premium provides clitoral stimulation by sucking instead of just vibrating. It has a similar effect of making women, like myself, come incredibly quickly and strongly.

But good god is it expensive! I mean, it’s definitely worth it, but this bitch costs an arm and a leg!

So that’s one plus for the Magic Wand. I do have to say, though, I prefer sucking sensations rather than just vibrations. I like my toys to simulate oral as closely as possible so if you prefer sucking to vibrations, get the Womanizer Premium.

If you don’t have a preference, then definitely go with the Magic Wand. It’s not nearly as expensive and it’ll give you a whole new world of pleasure.

This one is almost half the price of the Womanizer though, so that’s a plus. It’s still more expensive than the Magic Wand, though.

An interesting little feature is that it has a little ridged bit that gives you some extra friction. So if you like penetration AND vibrators and you can stand the price, I’d check this baby out. 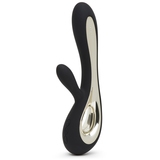 But I occasionally take this out if I’m looking for a different type of pleasure. This toy is also more expensive than the Magic Wand. It really makes me wonder why all of these toys are so expensive…Then again can you put a price on pleasure!?

Final Thoughts On the Magic Wand...

So those are the competitors to the Magic Wand. I have to say that while pretty much all of them serve a different function, the Magic Wand is still at the top of my list of sex toys. It’s super easy to use, and it’ll have you coming really quickly!

I think the only sex toy I like a tiny bit more than the Magic Wand is the Womanizer Premium. Does the name suck? Yeah... but the actual toy is suuuuuuuper sucky, but in all the right ways. If only it wasn’t so god damn expensive!

But all in all, the Magic Wand is a great choice for anyone who’s just starting to explore sex toys, or for the seasoned user of sex toys looking to add another toy to their box of goodies.